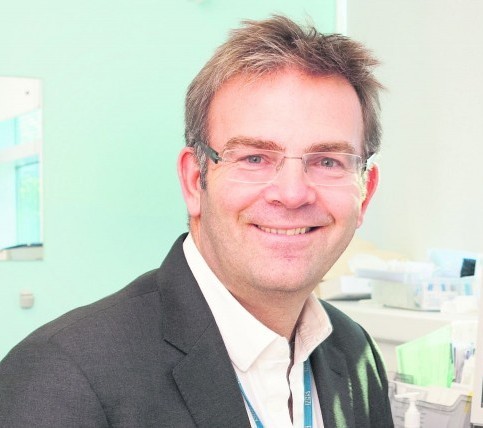 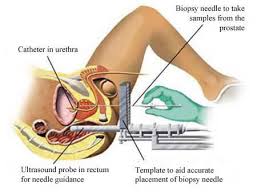 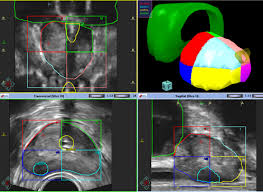 Example prostate biopsy report 1
Example prostate biopsy report 2
Transperineal biopsy of the prostate has replaced traditional standard diagnostic pathway for prostate cancer. This involved TRUS guided biopsy in ‘at-risk’ men i.e. those with a raised PSA or abnormal digital rectal examination. Different areas of the prostate are sampled with approximately 8 – 12 biopsy cores. However, there are problems with this pathway. Firstly, TRUS-guided biopsy is performed in a ‘blind’ manner, without the guidance of imaging to direct the clinician to any areas of concern. As a result, areas that are out of reach, such as the anterior prostate and apex, are either under-sampled or never sampled. Secondly, areas of clinically insignificant cancer area may be found, which may never have caused a man harm or prostate related death if left undetected and untreated. Thirdly, when a diagnosis of prostate cancer is made, information on the burden and exact location of disease, cannot be accurately determined using this technique.
Transperineal guided prostate biopsy (TPB) is an alternative method for sampling the prostate. It involves biopsies taken via a grid placed on the perineum (area between the scrotum and rectum), and is usually performed under general anaesthetic or sedation and loco-regional anaesthetic. The technique can also be used to ‘template map’ the whole prostate, if the MRI is not absolutely clear. Mapping involves biopsies taken from all zones throughout the prostate every 5-10mm. TPB can also be targeted to suspicious areas on MRI (MR-targeted biopsies).
The principal advantage of this technique is greatly improved diagnostic accuracy. When samples have been taken  using the Transperineal route, detection rates of cancer are significantly improved compared to TRUS biopsy. Further, anterior and apical areas of the prostate are more easily sampled compared to standard TRUS biopsy. In addition, the rate of sepsis is significantly lower, as biopsies are taken via the skin, rather than via the rectum. However, reported urinary retention rates are higher than following TRUS biopsy, varying between 3-30%, although this risk can be lowered through a short course of an alpha-blocker medication starting 2-3 of days before the procedure.
Who may benefit from a TPB ?
1. Men with a suspicion of prostate cancer and a previous negative TRUS biopsy
Many men undergo more than one TRUS biopsy if the suspicion of prostate cancer remains, despite a previous negative result. This is particularly relevant in those with an evasive anterior lesion, in whom a diagnosis would not have been made with TRUS biopsy, regardless of the number performed, due to the position of the lesion in the gland. The TPB technique allows sampling of these more difficult areas.
2. Reassurance of low-risk disease status in men wishing to undergo active surveillance
Men diagnosed with low-risk disease on standard TRUS biopsy may elect to undergo a period of active surveillance. A TPB allows confirmation or otherwise, of low-risk status prior to initiation of this management plan.
3. For planning focal therapy
TPB can provide an accurate map of disease burden and location. The results of the biopsy could guide targeted, or ‘focal therapy’, to the cancer lesion leaving the rest of the prostate intact. This has the advantages of much faster recovery time and less risk of erectile dysfunction when compared to the removal of the whole gland.
Pre-biopsy multi-parametric (mp)MRI helps guide image-targeted TPB to MR-visible lesions. When this PROMIS approach is used, almost two-thirds (59%) of men with 2 or more previous negative TRUS biopsies, were diagnosed with cancer.
TPB is especially useful for sampling the anterior region of the prostate which is particularly hard to reach with a TRUS biopsy.
Having a TPB following a (mp)MRI also potentially reduces the number of biopsies required reducing the time the procedure takes and improving the rate of recovery for the patient. In fact as imaging improves, it is likely that in the future that biopsies will only need to be taken from suspicious lesions.
Finally, computer registration (or ‘fusion’) of the mpMRI image onto an ultrasound image which currently guides biopsy may allow accurate targeting, through direct visualisation of the lesion. Such MR-US  fusion techniques are now regularly in use.